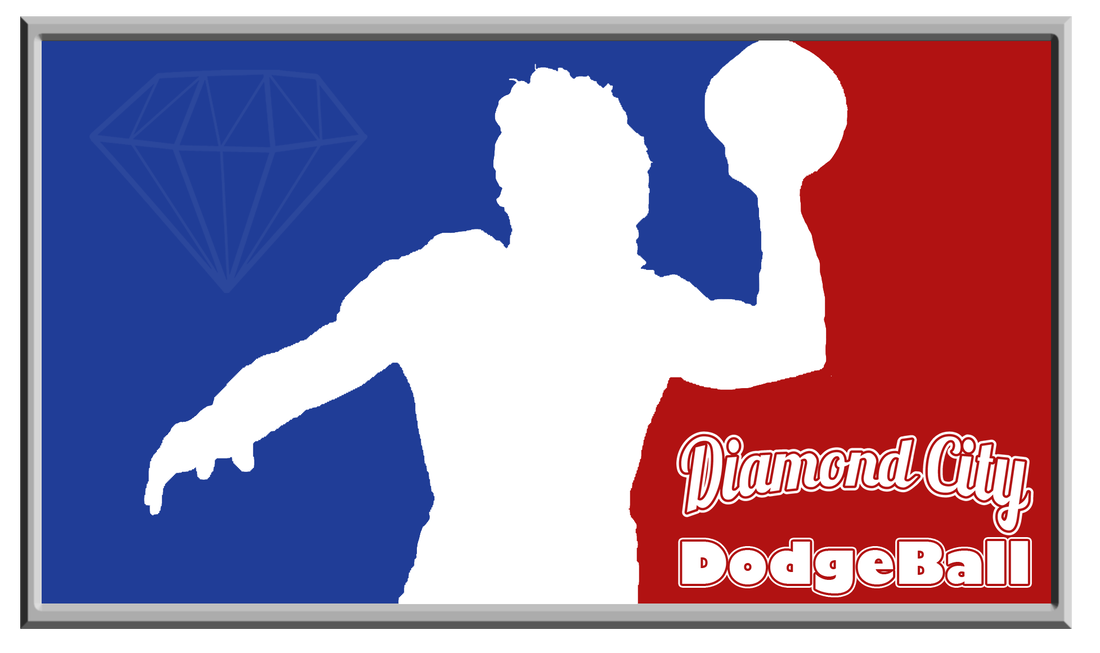 
The Court
The court is divided into two 30' X 30' areas, with a 4' X 30' neutral zone located at center court separating the two sides, an attack line located parallel and 10' from the center line, for a total court length of 60' from endline to endline, and a total width of 30' from sideline to sideline.
Equipment
6 regulation size balls should be used: 4 Blockers™ (8") and 2 Stingers™ (7” or 6").
Ball layout goes as follows: Blocker, Stinger, Blocker, Blocker, Stinger, Blocker.
Players
Teams consist of up to 12 players with 6 players per game.
Substitutions
Substitutions must be made prior to the start of the game. No substitutions can be made during a game, except in cases of injury.
Retrievers
Retrievers are individuals designated to retrieve balls that go out of play. Teams are responsible for providing retrievers. Any player that is not in the current game may retrieve the ball for their team.
Retrievers may not enter the court at any time.
Retrievers are only allowed to field balls from their side of the court.
Matches
A regulation match consists (X) games or 30 mins.
Game Type:

Elimination Game.
A game played until all opponents on one side have been eliminated. The first team to eliminate all its opponents is declared the winner.
Beginning Play
​​Play begins with all players positioned behind their team's endline.
The Rush
The Rush occurs at the beginning of each game or reset.
Upon the official's signal, both teams rush to center court and attempt to retrieve as many balls as possible.
A team may rush with as many or as few players as it wants, but at least one person from each team has to Rush.
There is no limit to how many balls an individual player may retrieve.
Players may not slide or dive head first into the neutral zone or they will be called out.
Crossing over the neutral zone will result in an "out."
Players may not physically grab and pull another player across the neutral zone or prevent them from returning to their side of the court.
Putting a Ball in Play
The player and the ball must go completely behind the attack line. During the Rush, any ball retrieved from the neutral zone must be returned behind the attack line before it may be thrown at an opponent. A ball that hasn't crossed the attack line is considered a dead ball, any hits or catches are voided plays.
There are two ways to put a ball into play following a Rush.
A player carries the ball across the attack line.
A player passes the ball a teammate who is behind or carries it across the attack line.
Time Outs

There are no team time outs

Outs
A player shall be deemed "out" when a live ball hits any part of the player's body, clothing, or uniform.
If a player is hit by a live ball rebounding off another player or ball lying on the court.
A defending player catches a live ball they have thrown
Players shall return from the Queue in the order they were put "out" (i.e. first "out," first "in").


IN
A player can return to play if one of their teammates has successfully caught a ball thrown by the opposing team and the thrower is ruled out.
Players shall return based on their queue – first “out”, first “in”.
Blocking
Players can defend themselves by blocking the ball in flight with another ball but must retain control over the ball they are blocking with. A player dropping or losing possession of the blocking ball is deemed "out."
Any blocked ball rebounding off another ball is considered live. Any player hit by the rebounding ball is deemed "out."
Pinching
The act of squeezing the ball in order to alter the thrown or blocked ball is not allowed.
Stalling
The act of intentionally delaying the game.
If a referee determines that a player or team is stalling, the referee will warn player or team. If the stalling continues, at the referees discretion, player or team will lose possession of all balls on their side.
If both teams are stalling a reset should occur
Out of Bounds Rule
If any part of the player's body touches the endlines or far neutral zone line, the player shall be deemed "out".
Momentum may carry a player out of bounds while making a catch. Providing control of the ball was established prior going out of bounds.
Neutral Zone Rule
The neutral zone is a 4' by 30' area centered around the centerline. A player may safely step into the neutral zone but not across. Any player crossing over the neutral zone is deemed "out."
Sacrifice Fly
An airborne attack, where an attacking player may legally cross the neutral zone to hit an opponent but the ball must leave the attacker's hand before any part of the attacker's body touches the opponent's territory. If successful, the player hit is out and Attacking player remains in.
Headshots
A headshot occurs when a player is hit directly in the head by a high thrown ball.
Any thrower committing a headshot will be deemed "out."